I moderate a small part of Reddit for UK freelancers. As we grow in size, more spam and other rule breaking posts get submitted to the group. Spam is annoying in general, but I particularly didn’t want it hanging around in the sub-Reddit as spam breeds more spam as others realise their posts will stick around, and I didn’t want people checking the group, seeing the spam and deciding either it’s dead or we just don’t care about it. If a spam post is flagged as spam by members, it will disappear if enough different people flag it, but as a small group there aren’t enough people being that diligent and as the person running the group it falls to me to remove the posts and potentially ban the person who sent it in from posting to the group again.

I had been checking the group once a day, but sometimes forgot, or if I was unlucky, a spam post would be hanging around for almost a day until I caught it. I wanted to keep on top of the problem, and wanted a warning when a new post was added so I could catch it if it was spam, or help out if it was legitimate and something I could answer.

Each sub-Reddit has an RSS feed of the new posts that come in, for /r/freelanceuk it is https://www.reddit.com/r/freelanceuk/.rss so I knew I could have something read that and send me a warning of new posts. It would be easy to get an email when a new post happens, I already have code that can read a feed and copy it into an email. But, I tend to avoid my email outside of work hours to let my brain relax and not think about work. So, a notification to my phone would be a better alternative.

I tried a phone app (name forgotten, sorry) which said it could do this – read a feed and notify when it changed, but I never received any notifications. So being a programmer, I looked at writing my own, using a service like Truepath to do the notifying part. While I got notifications working briefly, I couldn’t get it working longer term, maybe because it was set up to trigger to a browser and I wasn’t opening that enough to keep it active? Anyway, I was back to square one.

Having asked on the Farm mailing list whether anyone knew of a phone app for Android which would do what I wanted, Julian suggested I use an RSS reader like Feedly to do it, and Mike that I use IFTTT, which he uses to do other things with RSS feeds but supports notifications too.

I’ve used IFTTT in the past and found it a bit awkward and hit and miss, and was getting fed up of thinking about this problem by now and just wished Reddit would let a moderator get a notification on new posts within their sub-Reddit natively. So, I tried a couple of RSS readers instead, looking for small and light ones that didn’t require subscriptions. 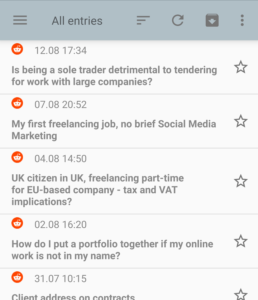 The one that has worked well is the bluntly titled RSS Reader, previously “Simple RSS Reader.” I have it set to check for updates every half an hour and it has worked great. Now, soon after a post is made I get a notification on my phone that one is waiting, pressing that opens RSS Reader and from there I can press through to the website, or just open BaconReader, my preferred app for reading Reddit, and go to that section as normal.

I’ve got the notification vibration turned off, as I don’t want to be disturbed when I’m concentrating on work, but I still check my phone often enough that I’m catching any spam pretty quickly. Also, I’m helping people more quickly too as I’m seeing their posts while they’re still fresh.

So, thumbs up to RSS Reader and it’s creator, Svyatoslav Vasilev!